Heðin Brú - The Old Man and His Sons 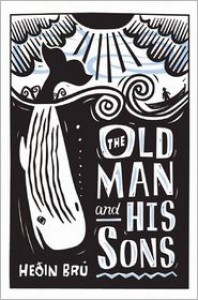 I would have liked - would have really liked - to enjoy this one more than I did but, alas, it didn't happen.

This is an interesting if sparse insight into the remote Faroese community around seventy years ago and yet virtually timeless, save for a couple of mentions to the telephone.
I'm fascinated by the Faroe Islands and did look at this book with favourably biased eyes for a long while either waiting for something relevant to happen or for the plot to take a relished twist. Unfortunately, nothing like that ever happened and the book was soon over.
And, to be honest, without the Faroe Islands in the background I wouldn't save much of this novel.

Brú is not Laxness and I guess it was wrong of me to involuntarily set a comparison between the two given the cultural similitudes between Iceland and the Faroe and the period in which both authors lived.

I liked some tiny sparkles of dry Nordic humour here and there and appreciated the no-nonsense approach of the author to the story. But it's the story in itself that ultimately didn't catch my interest.
The fact is that I've found the beginning of the book much more powerful (and for those who cannot stand whale slaughtering, quite disturbing) than the rest of 'The Old Man and His Sons'.

Blame it on the translation, but it looked like all the following events happening to old Ketil, his family and his neighbors after the blessed (or cursed?) whale meat bonanza are somehow disjointed from one another and none of them got me.

It's a pity for I thought and believed that this could have been the sort of book I treasure and Heidin Brú himself one of those unrecognized authors that I revere. However, to be fair 'The Old Man and His Sons' was a disappointment and I wouldn't do any justice to scores of books I read by rewarding it with three stars.