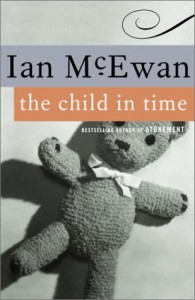 This novel has one of the greatest beginnings I can recall.

I am not the greatest fan of Ian McEwan, but I consider him an important novelist for what he did, finding his own personal (and not that comfortable) way in literature.
I never considered McEwan as my favourite cup of tea, though.

"The Child in Time" stroke me through its first 40-50 pages. They are at the same time beautifully written and easy to read. You can feel and perceive a sense of menace in every daily activity of Stephen, the protagonist. I sympathized with Stephen and liked his tenderness towards his only daughter, Kate. I also enjoyed the humour and many other minor details which are all portrayed in a masterful way by the author.

I was surprised. I had the impression of having picked up the wrong book. Either the publisher put a wrong cover on those pages or McEwan had a different side I did not know before. And this hidden side of him was making me think to other Britons such as Martin Amis and Jonathan Coe. Especially to the first one, indeed.

Then something happened to the book. It became kind of confused and uneasy to follow mixing up several parallel plots. Apparently McEwan was very confident about his capacity of getting by with flashbacks and flashforwards. He knew where he was going, but I did not.

Later on, I found the right path thanks to other awesome examples on how to write, but they had lost their stake and were pointing nowhere floating in a magical realism perfumed air. After all, what's the connection between, say, a British MP becoming Peter Pan in the 1980s and two lovers hanging out in the 1940s?
Not to mention the fact that Stephen considers his childhood rather ordinary at the beginning of the book (a holiday in Wales was the most exciting moment of it!) and then we discover he spent his early years moving from continent to continent with his parents, just like the real McEwan did. This sounds weird to me.

To keep it short, this book was a good choice and I am glad I discovered
what an extraordinary novelist McEwan may be. He certainly knows how to entertain his guests during the starters, but should select more carefully the ingredients for the main course. Maybe he became a better chef in the books he wrote after this one. I am pretty curious to get another invitation for dinner at Ian's.
Tweet