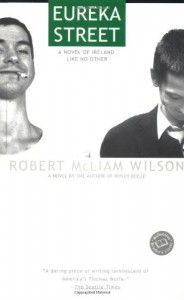 When I was 17 I was going to accept a summer-work offer from a farmer in Londonderry.

I'm not sure to remember properly what I was supposed to pick up in Northern Ireland. Might have been cucumbers. Unfortunately at that time my knowledge of the English language was pretty low, so I thought I would have picked up watermelons (known as "cocomeri" in Italy).
And I was wondering a lot about that task. Perhaps Northern Irish watermelons were smaller than the ones growing up under the warm Mediterranean soil.

I contacted the farmer via mail and he sent me a paper letter, explaining me how much he would have paid me, for how long I would have to work each day and so on. He didn't tell me anything about his religion, but I was sure that, deciding to hire a worker from Italy, he was Catholic. Being a rare example of non-baptized secularist Italian (before knowing the way to say it in English) I think I would have been a delusion for my jobsgiver.

Eventually I decided to don't go to Londonderry. But before of that decision I read all the informations I was able to find about the Sinn Féin party, Ira, The Troubles in Belfast ant the contrasts in Derry. Maybe part of my decision to don't work in Northern Ireland was influenced by what I read and watched on tv. I was a fearful boy.

Anyway, to cut a long story short, after those few weeks in 2000 I totally lost my interest for Northern Ireland. Belfast never attracted me that much and I never considered the city as a realistic option for a vacation.

Thanks to Robert McLiam Wilson (and to Jenny for suggesting his works to me) I'm considering the opportunity of giving Belfast a first chance.

This book is a blinding gem. I can't wonder why Roddy Doyle managed to put so much attention on Dublin with "The Commitments", "The Van" and "The Snapper" while "Eureka Street" didn't do the same for Belfast. In fact I found McLiam Wilson's way of writing so far better than Doyle's one. There are countless hilarious moments of humour in this book and a halo of disillusion and romanticism that makes it irresistible.

Plus, there is an unforgettable, deeply touching and yet extremely raw chapter that is very hard to forget. You will understand what I am writing about. I can confess how my cheeks got wet while reading those pages. And I understood how much McLiam Wilson loves his hometown.

Anyways.
The second part of "Eureka Street" title tells the truth.
This is really "A Novel of Ireland Like No Other".
I wished it was neverending.
Tweet